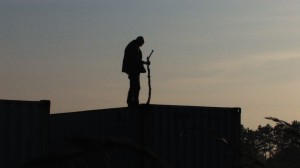 Following studies at the Ecole Nationale Supérieure des Arts Décoratifs and a stint at the Pavillon, a research cell at the Palais de Tokyo, Ariane Michel has created work in which the narrative techniques of cinema play an important role, inscribing them in her videos, installations and performances. These works, from her project

The Screening – a mirror projection in a forest – to her feature film Les Hommes (released theatrically in 2008) to her aquarium Les Lutétiens, which creates an encounter between living persons and a fossilised setting, all explore the same concern: through immersion, projection and montage, they provide those who approach them with an experience which decentres their perception.

Have a look on the MéPIC’ teaser

Open to the public for four months, from July to October 2013, the MEPIC hosted 49,900 visitors. The Laboratory of Art & water warmly thank all those involved in this cultural experimentation.